Kentucky author Erik Reece will be signing and reading from his new book about mountaintop removal coal mining in Kentucky entitled
"Lost Mountain: A Year in the Vanishing Wilderness - Radical Strip Mining and the Devastation of Appalachia" (Riverhead Books, 2006)
on Friday, February 10 at 7:00 at Communality, 112 High Street in Lexington
(2 doors down from Bombay Brazier Indian restaurant).

What the critics are saying about "Lost Mountain":
"A portrait of coal country as stark and galvanizing as Harry Caudill`s classic Night Comes to the Cumberlands" - Kirkus Reviews

" ... An impassioned account of a business rife with industrial greed, devious corporate ownership and unenforced environmental laws. It's also a heartrending account of the rural residents whose lives are being ruined by strip-mining's relentless, almost unfettered, encroachment." - Publishers Weekly

“Reading Lost Mountain is like grabbing a hot electrical wire – it fills you with fire, and makes you want to scream like hell.” - Men's Journal

About the author: Mr. Reece is winner of the 2005 John B. Oakes Award for Distinguished Environmental Journalism for "Lost Mountain," his Harper's magazine story on mountaintop removal, and his work has been featured in Orion magazine, The Oxford American, and the Lexington Herald-Leader. He teaches writing at the University of Kentucky. He can be reached at email ereec0@uky.edu

Kentuckians For The Commonwealth

The One Campaign kick-off was a great success last night and in the spirit of seeking justice in our city/region/world i thought i would post some things coming up locally. For more information about KFTC events/actions, go here .

Witness Tour / Trip to Pike County – Saturday, January 28th. We will organize a group of folks from Central Kentucky to join with others across the state to see the effects of Mountaintop Removal mining first-hand and to talk to KFTC members in directly-effected communities. We’ll carpool from Lexington starting at 8am and meet at the Grapevine Community Center in Phyllis. The carpool from Lexington will leave from Eastland Shopping Center off Winchester Rd. near the True Value. We will see examples of bad reclamation sites, effects of MTR and valley fills, and the impact of overweight trucks in the community.

Writing that Letter – Sunday, January 29th at 6pm at Third Street Stuff On the corner of Limestone and Third St. in Lexington). We’ll have a weekly gathering of members to hang out, enjoy some food, and write letters to the editor of local papers. We’ll provide fact sheets, information, and other help. This is an easy and fun way to really get our messages out.

I Love Mountains Day in Frankfort – Tuesday, February 14th. A focus day for lobbying in Frankfort to support or “Streamsaver” bill and to stop mountaintop removal See “KFTC Citizen Lobbying (continuous)” above for more information.

Music For The Mountains in Frankfort – Tuesday, February 28th. We’ll bring musicians to perform at the Capitol in Frankfort. We’ll focus on celebrating Eastern KY history and heritage while lobbying the legislature to preserve our mountains. See “KFTC Citizen Lobbying (continuous)” above for more information.

Hello everyone, please remember to come on out Thursday and bring your friends and family!
The ONE Campaign Kick-off 2006!
The ONE Campaign invites you to an evening of music, speakers, and fun
Thursday, January, 26, 2006
5:00-6:30 PM
Communality
112 W. High Street
Lexington, KY 40507
Come celebrate a great 2005 with ONE and find out how you can help in 2006
Featured guests include:
Congressman Ben Chandler
Kentucky State Treasurer Jonathan Miller
Donna McClure, Office of Senator Mitch McConnell
Rev. Albert Pennybacker
Music by Pitch Blue
Free and open to everyone
Light refreshments provided
ONE
The ONE Campaign is engaging Americans through a diverse coalition of
faith-based and anti-poverty organizers to show the steps people can take,
ONE by ONE, to fight global AIDS and poverty.
Posted by geoff and sherry at 12:02 PM No comments:

the snow is melting after only one day and i am thinking of thomas merton sitting so long ago and not many miles from here receiving news that his younger brother was gone from this world, shot down over the north sea. he was a pilot in the royal canadian airforce in the 2nd world war. merton had the bravery to talk about that war as the inevitable result of the world he helped to create. it would have been so easy to identify the evil of hitler, or of the nazi's. instead he saw the evil in himself. kentucky seems to be a million miles away from the deserts of iraq, but in the melting snow i see my complicity with the powers of this world. there is a dinginess to it. forgive us.
Posted by brad at 6:00 PM 2 comments: 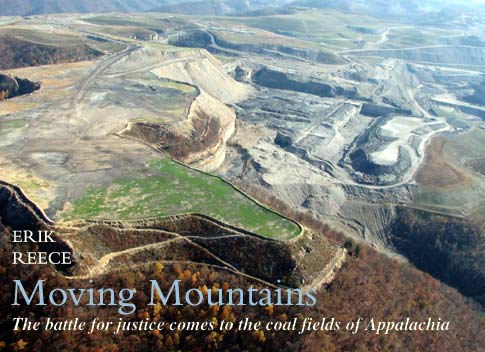 another brilliant article about MTR from Erik Reece here.
it starts like this...

NOT SINCE THE GLACIERS PUSHED toward these ridgelines a million years ago have the Appalachian Mountains been as threatened as they are today. But the coal-extraction process decimating this landscape, known as mountaintop removal, has generated little press beyond the region. The problem, in many ways, is one of perspective. From interstates and lowlands, where most communities are clustered, one simply doesn't see what is happening up there. Only from the air can you fully grasp the magnitude of the devastation. If you were to board, say, a small prop plane at Zeb Mountain, Tennessee, and follow the spine of the Appalachian Mountains up through Kentucky, Virginia, and West Virginia, you would be struck not by the beauty of a densely forested range older than the Himalayas, but rather by inescapable images of ecological violence. Near Pine Mountain, Kentucky, you'd see an unfolding series of staggered green hills quickly give way to a wide expanse of gray plateaus pocked with dark craters and huge black ponds filled with a toxic byproduct called coal slurry. The desolation stretches like a long scar up the Kentucky-Virginia line, before eating its way across southern West Virginia.
Posted by geoff and sherry at 3:45 PM No comments:

Beautiful, heart-rending reading – The Color Purple. I have to thank our friend Rachel in London for insisting on this one. Deeply moved, I finished it in the wee hours this morning. The book offers a poignant portrayal of segregation, rape, family ties, loss, exploitation of the weak, and the cost of slavery. And yet it allows for the hope of redemption in much of it. A highly recommended book…here is one small excerpt at the end of the story from a conversation between Celie (the narrator) and the husband that abused her for years:

“I tried to do something bout my children after you left me. But by that time it was too late. Bub come with me for two weeks, stole all my money, laid up on the porch drunk. My girls so far off into mens and religion they can’t hardly talk. Everytime they open they mouth some kind of plea come out. Near bout to broke my sorry heart.

If you know your heart sorry, I say, that mean it not quite spoilt as you think.

Anyhow, he say, you know how it is. You ast yourself one question, it lead to fifteen. I start to wonder why us need love. Why us suffer. Why us black. Why us men and women. Where do children really come from. It didn’t take long to realize I didn’t hardly know nothing. And that if you ast yourself why you black or a man or a woman or a bush it don’t mean nothing if you don’t ast why you here, period.

So what you think? I ast.

I thought this Wakley Prize Essay was poignant and a good read:

it's that time. reflections and projections.
this article by Rabbi Gellman is an interesting summary of religious trends in 2005 (mostly sourced in Barna's research - barna.org).
he lists his 5 major trends...here are the two that stuck out for me.

3. The energizing of the evangelicals. Although only 7 percent of adults are evangelicals, their voice is the loudest and their energy, charity, Bible study, and prayer life is the greatest. They give away more than three times as much money as other Americans. In the aftermath of Hurricane Katrina, it was the evangelical volunteers who came in the greatest numbers and stayed for the longest time. I hope that even people who are suspicious of their motives for America can admire the power of their good works when America needed good works the most. Even if they wanted to evangelize the storm-tossed remnants after giving them food, shelter and clothing—who cares? They were there, and most other religious groups were not there in anything like their numbers or sacrificial kindness. People who cannot appreciate the energy of evangelicals for good after the experience of their posthurricane mobilization have eyes, but they do not see. Most pious people flee from the culture and its needs. Evangelicals are engaging the culture and producing the most constant and cogent critique of cultural crud that we are seeing from any religious group in our time.

5. Revolutionaries. Barna labels as “Christian revolutionaries” the more than 20 million people who are pursuing their Christian faith outside the box. They meet in homes or at work. I even knew some New York Knicks who had a prayer and Bible-study group, but perhaps to see members of the Knicks turning to deep prayer may be motivated more by necessity than by faith. Anyway, these revolutionaries, as Barna labels them, are really passionate Christians who have no patience for the moribund bureaucracy of organized church life. The havurah movement in Judaism is fed by the same spiritual energy. For many people faith comes from a fire within, not a cup of coffee and a Danish after services in the social hall. And let us say, amen.
Posted by geoff and sherry at 6:18 AM 1 comment: