i've been wondering about some things i vaguely recall from books i sort of read.
namely, i've been thinking about being a missionary and how we (the community i belong to) might be missional. every now and again i feel like the foreigner that i am [it is often sparked by cultural flash-back (world-view whiplash) usually prompted by being reminded of something that is virtually absent from this place but irrevocably embedded in my aussie-ness (eg. cricket, australian football, gum trees).]

anyway....in these moments when i feel most foreign i experience a recalibration of sorts and many of the layers/filters that surround my perception are parted like the waters of the red sea. recently this experience sent me back to the basics and i thought about something i hadn't pondered for a while (remember: vague book recollection).

and becoming
learners
traders
and storytellers/troubadours.

perhaps we can add to this second list; mystics, poets, activists, artists, builders, gardeners, guides. any other imagery that gives life to the missionary vocation?

on monday evening two people came to our back door and asked if they could take photos of us as we ate. we had invited some friends over and were eating in our yard. we said 'sure'.
turns out the photographer is douglas adesko and he is creating some work with the family meal as the subject. he was passing through on some commercial work assignments and we guess he just randomly happened upon our place and saw the card table and chairs in the yard. he's hoping to publish a book with the images he creates.
check out his web site here. there is some amazing photo journalism under the 'apt building' portfolio.

the family meal has become one of our most treasured and sacred rituals as a community of faith. it was a sweet and serendipitous occasion.
Posted by geoff and sherry at 7:40 AM No comments:

for a wonderful read, go here.
it is a blog by mark pierson as he leads the urban seed community into church midwifery. we had the great pleasure of meeting mark back in april at the WALP conference.

and check out marcus curnow's blog (also from urban seed) as he rewrites this familiar song....
Posted by geoff and sherry at 10:22 PM No comments:

a couple of weeks ago we hosted a friend here in lexington by the name of john johnson. he came to teach us about forestry issues and how to participate in the protection of some of the most stunning wilderness on the planet. john is from this community in tennessee. over several years we have been enjoying a community-conversation with some the folk from svi. we have experienced the most wonderful cross-pollination of ideas relating to activism, environmentalism, spirituality, and theology. those of us who have had the 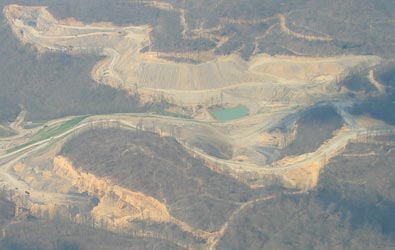 chance to engage in longer conversations have been profoundly nourished and seriously challenged to become more involved in the environmental movement as a duty/discipline of the christian way. as well as being challenged to be more involved in protecting god's good creation, we have been ambassadors of the good news that cherishes ALL of life - let us just say many of our friends involved in activism are surprised when they meet jesus-followers who don't think we can just trash the planet because "it's all gonna burn." the 'funny' thing is, such a creation-treasuring approach might actually be more like an old-school, orthodox perspective. this is nothing new! - if you are interested in a more rigorous account of how the people of god have approached environmental issues down through the ages, let me know. Joey, our resident practicing, enviro-theologian has put together a paper summarizing such matters.

SO ANYWAY....
here's a chance for our theology of "it's not all gonna burn" to come alive.
during the third week of june the 'mountain justice summer' team will focus on bringing the action to lexington. this is a 'heads-up' to keep some time open that week (11th-17th). more details will be posted as we get them.

in the mean time....
* take time to check out the 'campaign' web site at www.mountainjusticesummer.org

* also, there was a stunning article in the april issue of Harpers Magazine by a local writer/professor (not available on line, but we do have a couple of community copies for anyone wanting to read it).

* for a shorter read, check out this article from the Herald-Leader.

some of us are finding this an incredibly important issue as it brings together human rights, environmental justice, economic issues, and all of this right in our own backyard. it is a shame to say that we are often more animated by issues across the world than we are by injustice in our own neighborhood.

just returned from the Bike Lexington Rally. it was a beautiful morning and a good turnout to celebrate riding a bike as an alternative way to get around (gas prices, pollution, andallthat). Also to promote a more bike-friendly city. the holy father of biking for lexington (papa BF) gives his blessing (right)


here are some pics....brooke won a prize! 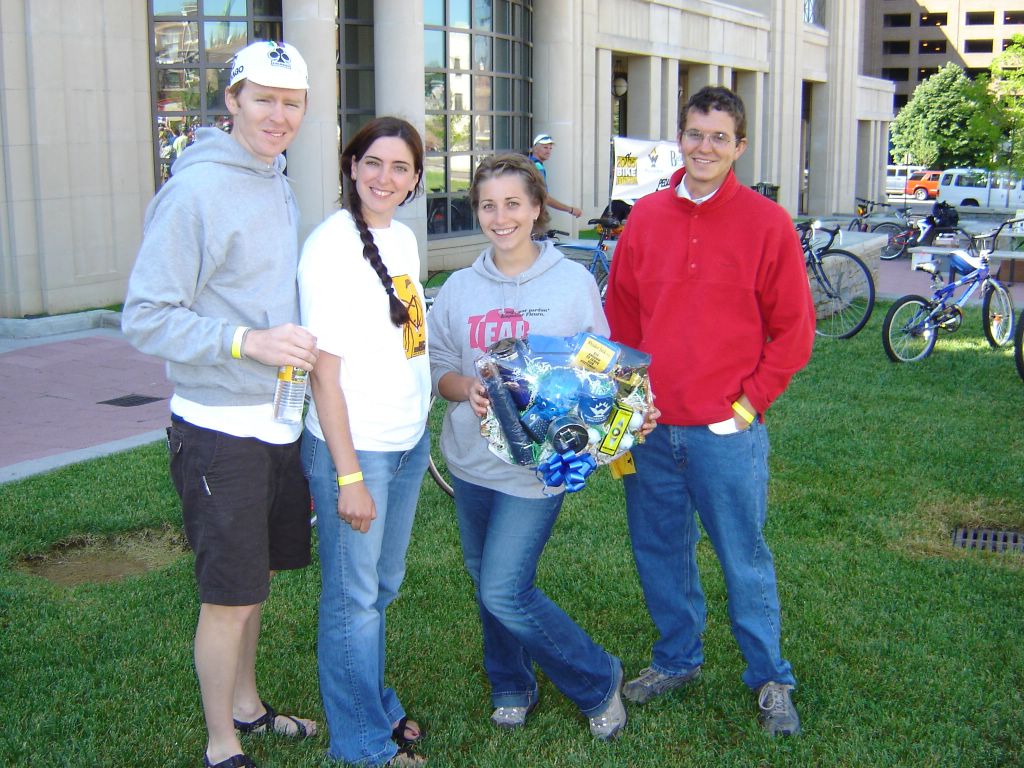 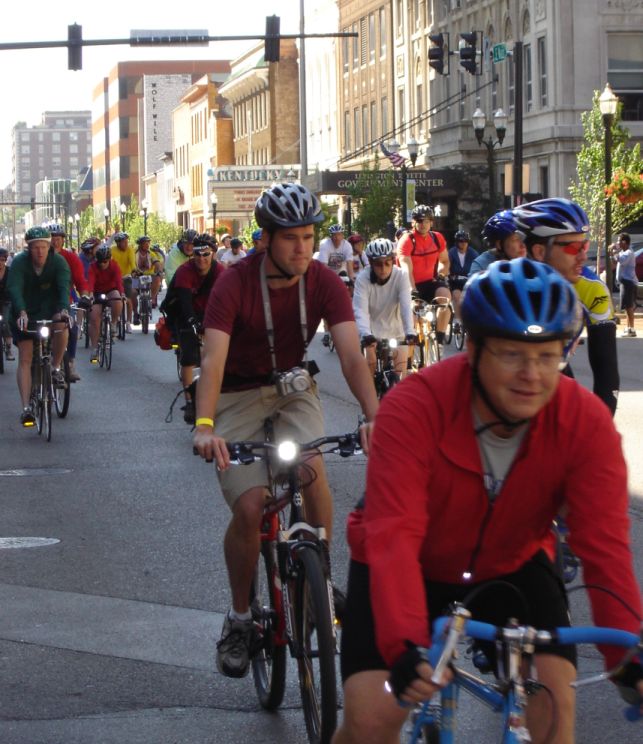 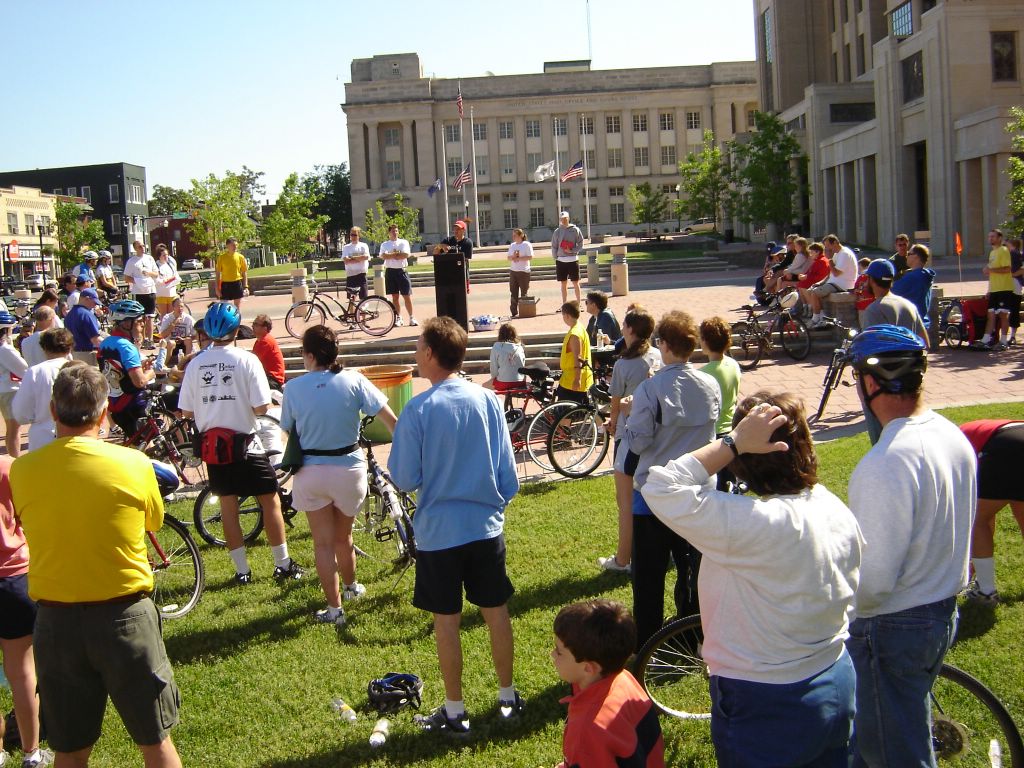 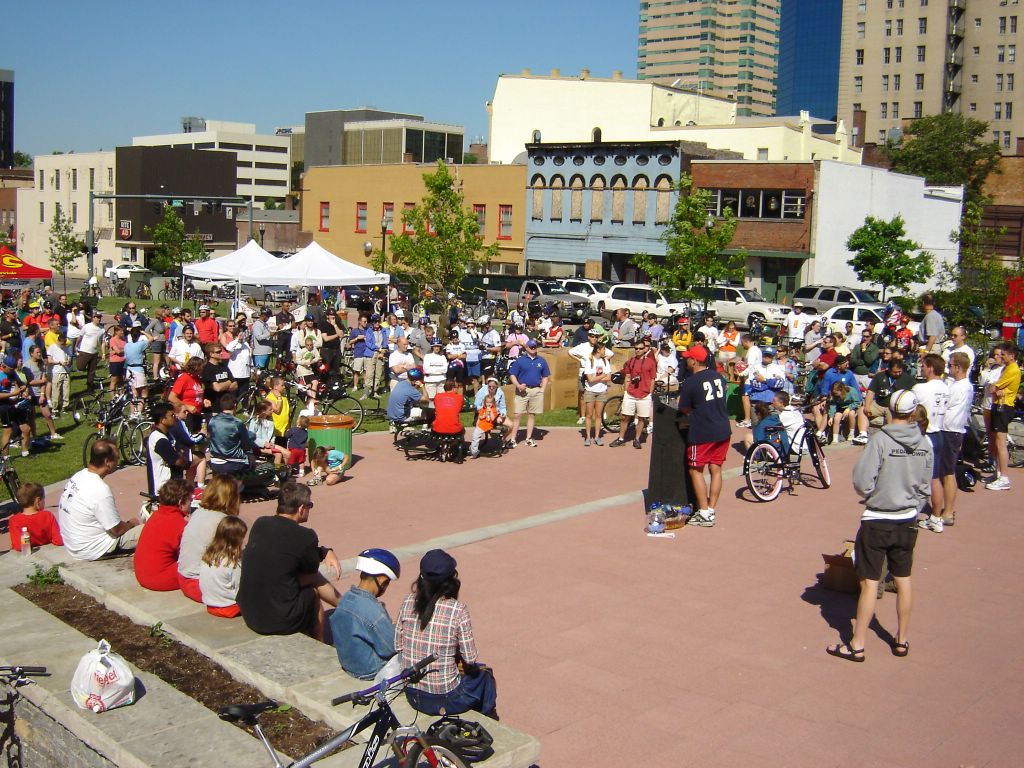 amazing happening at our place on friday.
sherry and isaac were upstairs. no-one was downstairs.
the door was locked but our back, kitchen window was open with only an insect screen to make a barrier between our kitchen table and the great outdoors.
so....
someone cut the screen with a knife, reached in and took some letters perched on the table. they read the letters and then wrote this note on the back of the envelope.

the letters they read detailed some thankyou's about refugee donations and also some information about a world vision child we sponsor.

as you might gather from the note, this would-be-burgler had an attack of conscience and thought it better to repent....s/he was cut to the heart (acts 2:37).

we wish we could find this person and have them for a meal and a chat and perhaps become a friend. we are thankful for whatever grace appeared and we are hopeful we might be just as ready to turn as our would-be-guest was.
Posted by geoff and sherry at 6:02 AM 2 comments:

I have a friend who is at least a bit wary of religion. She would say she grew up in a "very religious home," and that her upbringing did little to endear the church to her. She reported that she once became irate when she thought a friend of hers asked if she "knew anything about Jesus," as if this friend was working a covert angle of friendship evangelism, and was choosing her moment to pounce with a gospel message. As it turns out, her friend was wondering if she "knew anything about cheeses," (which is actually a mistake that has stymied North American missionaries for generations.)
Well I was talking to this irreligious friend of mine recently and I shared a bit of what I had learned at a meeting about mountaintop removal in West Virginia and Eastern Kentucky. I told her how convicted I got from the meeting, and how I was trying to take cold showers and such. She stepped in and warned me about allowing a conviction, either one religious or one environmental, to reap guilt in me. This would not be productive. This would only generate more guilt when I fail to live up to my own standards.
This from my supposedly irreligious friend; this from one from whom I did not expect such a beautiful lesson. Fear and guilt is clearly not the appropriate or loving response to the presentation I experienced. Nor do I think Jesus would have us cowering before the rulers of this world, despite their large machines and poor decisions to date. I think He'd have us spontaneous, free, loving, gladly renouncing some freedoms so that less coal may be used to keep our lights on.
And I know my non-religious friend wouldn't want me to live in guilt and fear. When these things reign they leave no room for surprisingly good talks.
Posted by ryan k at 6:32 PM 1 comment:

As Pentecost draws near, our imaginations are primed by the signs and wonders that sparked those first followers of the Way.

Last week a miracle occurred in Lexington. The miracle involved two men - broken, addicted, lonely, and seemingly without hope. It came in the shape of two men receiving the divine gift of dignity. They moved from their tiny one-room dwellings in pitiful, income-based housing (picture a prison cell) into a real house. One of the two described it as “a real nice shotgun” with “nice thick carpet” and a backyard that will be “just right for grillin’ out.” As we drove the 5 blocks to their new place these men dreamed dreams about having people over (an impossibility in their old places), sleeping through the night without being woken by fighting over drug-deals gone bad, and sitting out on their porch on nice days. It was a small glimpse of holy anticipation and, for just an hour or two, these men without hope for their future, were caught up in privilege and self-worth.

Now, lest this picture seem unreal and sugar-coated, let me say some other things.
(there's more)
These guys are friends of ours. They bring candy (lollies/sweets) and cakes for Isaac and they keep us up to date with their lives. We visit them and they visit us. We share food and coffee and tea. One of them even lived with us for over 9 months. We know them well. It is clear that these men still drink too much. They both have serious mental disabilities and learning difficulties. It is likely that they will never work any ‘important jobs’ or contribute to the ‘greater good’ of the city of Lexington through taxes or civic service. They collect their checks each month (disability and armed services veteran) and quickly spend them on alcohol and chewing tobacco…and more alcohol. And perhaps, if they are really conscientious, some cans of beans. Yet they are beloved ones of the Maker of the Universe. If God came in the flesh in this city, this week, we imagine he would celebrate their new place and spend time sitting on their dilapidated porch listening to their stories of misfortune (impoverished childhoods, wrecked marriages, violence, estranged children, mental breakdowns and other illnesses). As they tipped back their heads for another hit of cheap vodka, they would admit much of the misfortune was self-inflicted. And Jesus might nod knowingly, biting his tongue so that this moment of quiet dignity could carry on a few more minutes.

As we carry on this work of church-in-mission we are regularly confronted with moments like these and they feel far off from the earth-shattering majesty of Pentecost. Yet we are discovering that peace and grace and justice sneak up on us at times like this and, like blades of tender grass that shatter concrete, can be easily missed or underestimated. We keep looking in the thin places of your lives for Pentecost signs and wonders that remind us of divine workings in this God-loved world.
Posted by geoff and sherry at 10:12 AM 1 comment: