thank you to everyone who contributed to 'a school for conversion' over the weekend.  it is always a blessing to share our story with guests and remember what God has done to, through, and in us.

and thank you to our guests...you sacrificed precious time and resources to be with us.  some of you traveled far and our prayer is that all of you were nourished and inspired. stand up for your love

loving the new u2 album at our house.  this song is a great shot of rock...and the lyrics aren't half bad.  i'm listening to this track with an ear to it being a wake-up call to the people of God.

my dad reminded me the other day of a C.S. Lewis quote that suggested that God/'the good news' is like a lion...does not need to be defended, just let out of it's cage.
Posted by geoff and sherry at 7:32 PM 1 comment:

i spotted this remarkable article at Mark Sayers blog.

here's a snippet but the whole thing is worth reading.

ACCORDING to the Australian Bureau of Statistics it appears that lifelong marriages are becoming a thing of the past. Few marry for life any more.

We have fixed term-contracts for the buying of property, cars and insurance, but there is only one contract available for marriage and it is for life. Is it time to consider introducing fixed-term marriage contracts?

The fixed-term contract is not meant to be a "quick fix" or an "easy out".

It would allow for the celebration of the renewal of vows after a five-year or 10-year term and encourage partners to work towards maintaining a good relationship – in effect, it opens communication akin to a marriage performance review.

Or it would allow for the marriage to be dissolved by completing an acceptable contract term, without the shame and stigma associated with the failure of a marriage.

So why bother getting married at all? Because inherently we want to believe that we are making a commitment for life. Surely no one enters a marriage with a view to "give it a shot".

We stand in front of friends, family, even God and promise "until death do us part" and, at the time, we believe it. This only adds to the sense of failure when we can't deliver this promise.

It's a simple process: the standard certificate of marriage becomes a five-year contract. The marriage celebrant would continue to retain a copy for their records; forward the certificate to the Registry of Births, Deaths and Marriages for the registration of the marriage; and provide the marrying couple with a copy.

The marriage licence would clearly state the start and dissolution date for the five-year term.

"A Time to Break Silence"

Below is a link to MLK's Riverside Church sermon "Time to Break Silence" delivered on April 4, 1967, exactly one year to the day before he was assasinated....I was reading over it again this morning to prepare for this weekends School For Conversion.....if you have never read this before please do when you have the time....amazing inspiring stuff.....

it's been a busy last couple of days.  as we get ready for hosting a school for conversion there has been plenty to keep us occupied. 2.  earth day gathering hosted by one horizon...jeff barrie and co. were there from killowatt ours. Bono has this to say in an op-ed piece from the NY times over the weekend:

Carnival is over. Commerce has been overheating markets and climates ... the sooty skies of the industrial revolution have changed scale and location, but now melt ice caps and make the seas boil in the time of technological revolution. Capitalism is on trial; globalization is, once again, in the dock. We used to say that all we wanted for the rest of the world was what we had for ourselves. Then we found out that if every living soul on the planet had a fridge and a house and an S.U.V., we would choke on our own exhaust.

Lent is upon us whether we asked for it or not. And with it, we hope, comes a chance at redemption. But redemption is not just a spiritual term, it’s an economic concept. At the turn of the millennium, the debt cancellation campaign, inspired by the Jewish concept of Jubilee, aimed to give the poorest countries a fresh start. Thirty-four million more children in Africa are now in school in large part because their governments used money freed up by debt relief. This redemption was not an end to economic slavery, but it was a more hopeful beginning for many. And to the many, not the lucky few, is surely where any soul-searching must lead us.

our lives on this earth

The mature person realizes that life affirms itself most, not in acquiring things, but in giving time, efforts, strength, intelligence, and love to others. Here a different kind of dialectic of life and death begins to appear. The living drive, the vital satisfaction, by "ending" its trend to self-satisfaction and redirecting itself to and for others, transcends itself. It "dies" insofar as the ego is concerned, for the self is deprived of the immediate satisfactions which it could claim without being contested. Now it renounces these things, in order to give to others. Hence, life "dies" to itself in order to give itself away and thus affirms itself more maturely, more fruitfully, and more completely. We live in order to die to ourselves and give everything to others. ...This "dying" to self in order to give to others is nothing more or less than a higher and more special affirmation of life. Such dying is the fruit of life, the evidence of mature and productive living. It is, in fact, the end or the goal of life.

The End of Philosophy

i found this article challenging and inspiring.  a good follow up to the piece from Newsweek Billy posted yesterday.

Socrates talked. The assumption behind his approach to philosophy, and the approaches of millions of people since, is that moral thinking is mostly a matter of reason and deliberation: Think through moral problems. Find a just principle. Apply it.

One problem with this kind of approach to morality, as Michael Gazzaniga writes in his 2008 book, “Human,” is that “it has been hard to find any correlation between moral reasoning and proactive moral behavior, such as helping other people. In fact, in most studies, none has been found.”

Today, many psychologists, cognitive scientists and even philosophers embrace a different view of morality. In this view, moral thinking is more like aesthetics. As we look around the world, we are constantly evaluating what we see. Seeing and evaluating are not two separate processes. They are linked and basically simultaneous.

I found this article written by Newsweek editor Jon Meacham to be well done and oddly encouraging in many respects.

Here is the article:

But that project has failed, at least for now. In Texas, authorities have decided to side with science, not theology, in a dispute over the teaching of evolution. The terrible economic times have not led to an increase in church attendance. In Iowa last Friday, the state Supreme Court ruled against a ban on same-sex marriage, a defeat for religious conservatives. Such evidence is what has believers fretting about the possibility of an age dominated by a newly muscular secularism. "The moral teachings of Christianity have exerted an incalculable influence on Western civilization," Mohler says. "As those moral teachings fade into cultural memory, a secularized morality takes their place. Once Christianity is abandoned by a significant portion of the population, the moral landscape necessarily changes. For the better part of the 20th century, the nations of Western Europe led the way in the abandonment of Christian commitments. Christian moral reflexes and moral principles gave way to the loosening grip of a Christian memory. Now even that Christian memory is absent from the lives of millions."

Religious doubt and diversity have, however, always been quintessentially American. Alexis de Tocqueville said that "the religious atmosphere of the country was the first thing that struck me on arrival in the United States," but he also discovered a "great depth of doubt and indifference" to faith. Jefferson had earlier captured the essence of the American spirit about religion when he observed that his statute for religious freedom in Virginia was "meant to comprehend, within the mantle of its protection, the Jew and the Gentile, the Christian and the Mahometan, the Hindoo and infidel of every denomination"—and those of no faith whatever. The American culture of religious liberty helped create a busy free market of faith: by disestablishing churches, the nation made religion more popular, not less.

America, then, is not a post-religious society—and cannot be as long as there are people in it, for faith is an intrinsic human impulse. The belief in an order or a reality beyond time and space is ancient and enduring. "All men," said Homer, "need the gods." The essential political and cultural question is to what extent those gods—or, more accurately, a particular generation's understanding of those gods—should determine the nature of life in a given time and place.

If we apply an Augustinian test of nationhood to ourselves, we find that liberty, not religion, is what holds us together. In "The City of God," Augustine —converted sinner and bishop of Hippo—said that a nation should be defined as "a multitude of rational beings in common agreement as to the objects of their love." What we value most highly—what we collectively love most—is thus the central test of the social contract. 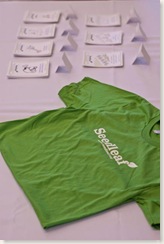 the seedleaf fundraiser was a great success.  a wonderful mix of people from our fair city...all eager to support seedleaf and the wider work of seeking health and hope for Lexington through urban agriculture.  congrats to Ryan and Becca for their hard work and we wish them rich blessings for the growing season.  if you missed the chance to come and support this work please feel encouraged to visit the web site and discover ways to partner with us.   as a community of faith we can be grateful and proud we have had the chance to help ryan plant this 'seedling'. 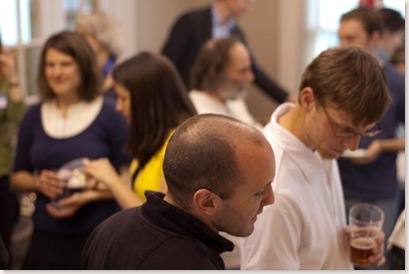 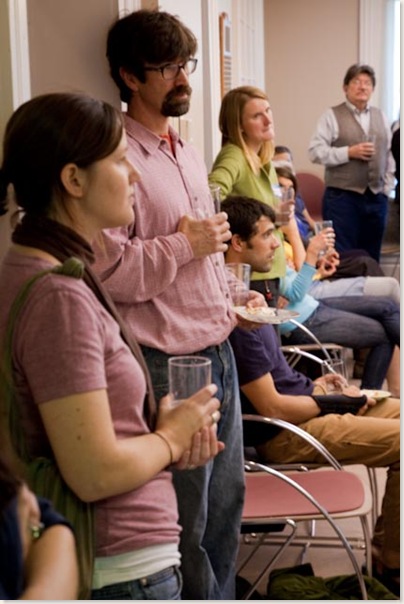 Posted by geoff and sherry at 10:15 AM No comments: